The Mac is a good tool for processing, storing, and displaying pictures.

For pictures I take on my phone, I attach the phone to my Mac with a USB cable, and then open the Image Capture application (I have a link to it in the Finder sidebar). Then I click "Import All" and all photos from the phone are copied to the Pictures folder.

Some people just email their photos to themselves from their camera and read them on the computer. Recent versions of macOS support AirDrop so that you can send photos wirelessly.

I have a Sony camera that used to send its pictures to my Mac via WiFi, but Sony has stopped supporting the software that does this. Now I have to use a cable, as above.

For photos from other digital cameras, I plug the camera's CF or SD card into a USB reader and use the Finder to drag the photos to the Pictures folder.

No matter how I took the pictures, I check the photo files using Quick Look to make sure they got onto my Mac's disk, before I delete them from the device.

I have scanned old pictures, both slides and flats, using an Epson 4490 scanner, and had good results. I use the wonderful program VueScan to drive the scanner. It takes time though -- between 5 and 10 minutes per picture.

I sent hundreds of slides to

ScanCafe.com, who scanned them to disc in India at a low price. That was very satisfactory. ScanCafe has now said it will do its scanning in the USA, which should provide faster turnaround.

In the 90s I sent hundreds of slides to Kodak (remember them?) to be scanned onto PhotoCD.

In either case I then copied the photos to my Mac.

Once Pictures are on the Mac

Never have only one copy of a file you care about: back it up. I have a directory which contains all the original picture files from the camera, in subdirectories named things like Nikon28, Nikon29, etc. When a directory gets near to 650MB, I burn it to CD-R and start a new one, in addition to all other backups I do. If I take a trip and have a lot of pictures that go together, sometimes I will burn a DVD+R or even a DL disc. I save these discs in a box; they should last for a long time. My idea is to have a read-only backup copy before I start changing things. (I took a really great picture in 2001, and while trying out filters in Photoshop, accidentally hit SAVE, and destroyed the original.)

I make original files read-only just after I copy them to my Mac. The idea is that my original should never be changed.. always work on a copy, so if I screw up or change my mind, I can recover.

When you get your pictures onto your Mac, you will want to do a few things.

Affinity Photo as an alternative to Adobe Photoshop, and

Affinity Designer as an alternative to Illustrator. These products work well for me, and are less expensive than an Adobe subscription.

cookbook for preparing photos for the Web using Affinity Photo. I am still learning how to do this well.

(GIMP is another free alternative to Photoshop. Acorn is another photo editor for Mac, costs $29.95 one time.)

Displaying Pictures on the Web

There are many web services that allow you to share pictures on the World Wide Web. Here are some choices you have to make:

Here are a couple of sites: search the web for more.

When I started keeping online photo galleries, there were few choices, so I built my own. I have a private seb directory that needs a password to enter. Strangers, and Google, can't enter. (So my friends don't need to worry that their picture will end up on a billboard advertising something.) My site has over 80 galleries containing over 7000 pictures. For each picture I add, I add a caption to a file, and copy the photo to a web directory, and then I regenerate web index files and push them to my private site. This setup means that I have to fix things when browser or web technology changes. On the other hand, I control the privacy of the pictures and can improve the site whenever I want.

I set up our living room computer to show photos at random in the screensaver from a large collection. I use Photos to manage the picture library. I copy pictures into the Photos app for display on the Mac. (I used to use iPhoto, which was superseded in Yosemite.) 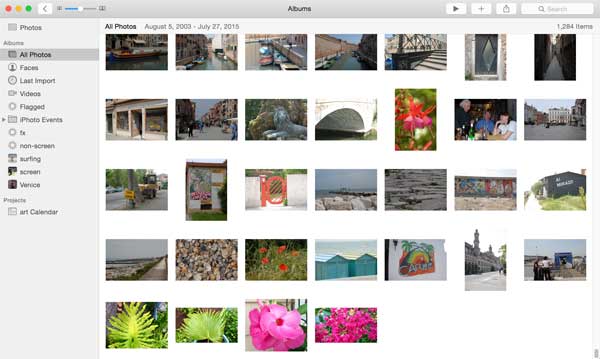 On the living room computer, I have thousands of pictures in Photos. For each picture I add, I edit and straighten and crop it if necessary. Since the display is an HD TV, I try cropping to 16:9 if the picture can stand that: doing so will eliminate black space at the sides or top of the picture. Then I try the "enhance" button to see if this makes the picture look better. If not, I may try individual functions from "Adjust" but I don't spend a long time on it. Some pictures are improved on our TV by using the "Definition" and "Saturation" sliders. Depending on the camera's settings, it may also need a hit of "Contrast."

I add pictures to a Photos album called "screen" if they should be in the random screensaver.

Experience with the Photos App

Photos continues to improve with each macOS release, but still does some functions in idiosyncratic and undocumented ways.

Some operations in Photos take a while to complete, such as File ► Export.... Once you initiate one of these operations, there is a very tiny progress indicator.

Photos has exhibited picture corruption issues on my Mac Mini: sometimes a rectangular selection of an edited picture is replaced by garbage or a black box. The original is undamaged. I have seen this in Sierra, High Sierra, and Mojave. Re-editing the photo and re-saving it fixes it. It may be a hardware problem with my GPU. Others have seen it but there has been no resolution, and no acknowledgement from Apple.

In Photos, there are two ways to display a slide show of a group of pictures: you can right-click on a folder name and select "Play Slideshow", or you can select File ► Create Slideshow... which will create a "Project". Folder slideshows play music during the slide show, and there is no button to turn the music off or control inter-slide timing. You can turn the music off for a project slideshow, by clicking a music-note icon on the project, and hovering the mouse over the selected music until an invisible button with an X becomes visible, and clicking it.

Photos appears to try to do face recognition and geolocation assignment to my photos in the background when the app is not running. I have seen processes in Activity Monitor that seem to be doing this, but never found any explanation of how it works or when. I don't know if they are sending my data to Apple. The face recognition is often wrong and the interface to it is comically bad. There is no way to tell Photos that something it thinks is a face is not a face. There is no way to tell Photos that a face it picks out is a random stranger, or a face in a painting. I don't use it much. Photos are sometimes tagged with a geographic location: Photos uses GPS data if a photo has it. Some photos that were taken way before the invention of GPS have locations assigned also: I can't find any explanation of how it does this. It appears that the locations were obtained from other people's photos of the same subject. Also, there are many different names given to the same place: for example, 14 photos taken the same day were labeled "E 9th St" (no city indicated) when they were taken at many different streets, none at 9th St. Why be so specific with wrong data?

In OS X El Capitan, the ability to add "extensions" to Photos was provided, and there are some available in the App Store. A few things I would really like:

In the old days, I took a lot of pictures, and put them in albums that sat on a shelf, and very rarely looked at them again. Now I can set the living room TV to show pictures at random, from thousands of travel and family photos, by connecting the TV to a computer. (An AppleTV could do the same sort of thing.)

Currently I view my Mac photos via the photo Screen Saver. I use the "classic" saver on the Mac. Since my Mini is so old that it cannot run Mojave or later versions of macOS, if I want to go back to review a picture, the left and right arrow keys on the keyboard will sequence through the Screen Saver display. (I also changed /System/Library/PrivateFrameworks/Slideshows.framework/Versions/A/Resources/Content/EffectDescriptions.plist in macOS to make the pictures stay up more than 5 seconds.)

If I ever get a new Mini that can run a post-High-Sierra version of the OS, the arrow keys will no longer work, and the Screen Saver duration patch will be different.

I have been experimenting with a third party screen saver, "ArtSaver" by Gabriel Zachmann. It has some nice features:

ArtSaver can display the geolocation for pictures, but many of my old photos don't have that data, and the photos that do have it often say just "United States" or have crazy mixed languages, like "Venezia, Italy"/ I think I will copy the files for screensaver display to a new directory, strip out the GPS data entirely (using exiftool), and add captions that actually say what I know about the photo. Gabriel was very helpful in teaching me how to use his program. (ArtSaver cannot lock the screen, so if you need this feature you have to use the official screen saver.)

Another thing I have not gotten into is shooting in RAW format. This makes bigger disk files but would mean I could adjust a lot of things like white balance later. The real expert guys who spend a lot of time making their pictures perfect shoot RAW. It is especially important for photos that will be printed on paper.