I use a Mac Mini in the living room for audio, video, and web browsing. It is connected to the TV and the stereo. The Mini's iTunes music collection replaced our CD shuffle player. The Mini's screen saver is set to show photographs at random from about 10,000 pictures. I currently have about 11,000 music tracks (over 1300 albums) in iTunes: usually I let the Mini pick them at random. 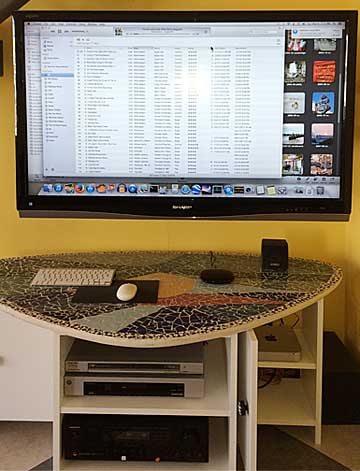 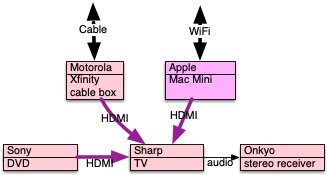 A Mac Mini can drive a high-definition TV easily. The highest screen resolution of HD TVs is 1920 x 1080 pixels. The Mac supports "1080p" resolution. I chose a TV that would display true 1080p in "dot for dot" mode over an HDMI input. Sony and Sharp make models that will work. The best screen size depends on viewing distance: you have to sit pretty far back from a really big TV. LCD seems like the best bet: plasma TVs are cheaper but have problems with burn-in and get dimmer after a few years. Look for fast response (which cuts down on ghosting).

The TV has three HDMI inputs: the Mini, a DVD player, and a cable box. The audio output from the TV is sent to a stereo receiver that runs our speakers.

Our computer is an Intel Mac Mini, bought in 2012, replacing an older Mini. It is currently running OS X 10.13.6 (High Sierra). It can't run versions of MacOS later than that. It came with 8GB of memory and a 750GB hard drive.

The Mini is connected to the TV with an HDMI cable. The TV is configured to show the computer's output in "dot for dot" mode.

The Mini's audio output is connected to the stereo receiver with a standard miniplug to RCA audio cable.

The Mini has a wired mouse and a wired keyboard (a wireless keyboard kept disconnecting, wireless mouse kept needing batteries).

The Mini's built-in WiFi connects to our AirPort base station on our local network, so it has access to the Internet, and I can surf the web, stream movies, do client presentations, etc. from the couch. Other Macs in the house can connect to its file system and move files to and from the Mini. I set up ssh keys so that I can execute Terminal commands on the Mini using ssh from a local computer. The other Macs can also start Screen Sharing and see the Mini's screen, drive its mouse cursor, and type into applications.

The Mini is set up as follows:

I have not installed much Non-Apple software on the Mini: just Firefox, Chrome, Emacs, Audacity.

I add picture files to Photos using the Import function. I use the full resolution versions of these pictures and let Photos downscale them, rather than trying to shrink them to the screen resolution. I adjust each picture to make it look good on the TV, cropping it to HDTV proportions if possible in order to avoid black bars on the sides, and adjusting the exposure, saturation, noise, definition, and sharpness.

To view pictures, I use the remote to switch the TV's input to the Mini and let the screensaver kick in. If I want to see a particular set of pictures, I can cause Photos to display a slide show from an album.

I add music tracks to iTunes by ripping CDs or vinyl, or by buying music online. I have imported over 11,000 tracks into iTunes. I defined several playlists with different groups of music tracks. To play music at random, I set up a playlist of chosen songs, click Play in iTunes, and then activate the "shuffle" icon.

The Apple Remote app on an iPhone or iPad will cause iTunes to skip to a new song, list what's playing, change volume, etc. -- when it works. (The iPhone or iPad must be on the same wireless network as the Mac running iTunes.)

good article by Matt Neuburg on TidBits.com that explains the basic steps to import music from vinyl LPs. I use the Mini to record audio from my old turntable, using an

ARTCessories USB Phono Plus v2 preamp box to convert analog to digital and send it to the Mac via USB. On the Mini I use the free software

Audacity to capture the audio stream, clean up the data, and create MP3 files I can put into iTunes. El Capitan's built-in audio driver works fine.

I bought an "upscaling" (progressive scan) DVD/Blu-ray player (Sony). These are not expensive, and DVDs look very good. The DVD player has "Apps" including access to Netflix and Amazon Prime Video, connecting via WiFi.

The Mac will work as a DVD player using an Apple external optical drive. It doesn't seem to be as sharp as the upscaling dedicated DVD player though. It would be possible to copy the content of a DVD to the hard drive, but unless you crack the copy protection, it won't play. (Haven't tried this.)

We stream movies from Netflix onto the big TV, using the app built into the cable box, or via the Mini. We can also stream video from Amazon Prime via the cable box or the Mini.

We can also stream movies from Netflix via an app built into the Xfinity cable box.

We started with Comcast cable. With the HDTV, I got HD cable. Comcast swapped the boxes and charged us a few dollars extra per month. The packages available were either very expensive with lots of channels we never watched, or much less expensive but with only a few channels. (Where we live, we can only get three channels over the air, and there's only one cable TV provider.)

Recently we eliminated our land line and got an Xfinity triple play package from Comcast. It has many more channels, landline number stays the same but comes over the cable wire, and Internet speed is higher.

I signed up for a trial subscription to Sling TV. I installed an application on the Mac that gave us over 20 channels, including ESPN and TBS for sports, and several movie channels including IFC and Sundance. I didn't continue with Sling when the trial ran out. Some of the issues we had were:

(Dec 2017) YouTube TV was announced about November 2017, as a service that would provide a group of live TV channels, including broadcast channels, sports, and movies, via streaming over the Internet. I tried it out and was disappointed.

All TV channels were at most 480p. That is, not HD: fuzzy. Not what I expected. It turns out that Apple has not published the interfaces that would enable showing HD content to external monitors. They keep these for themselves. (This probably explains why Sling TV was unsatisfactory on my Mini.)

(Feb 2018) YouTube TV has announced support for the Apple TV. I am considering whether to buy an Apple TV, subscribe to YouTube TV, and get rid of Comcast TV. Decided not to.

I bought a new phone, and it came with a free year's suscription to Apple TV. So I signed up. It is worth what I paid for it, i.e. nothing. If I were paying $10/month for the privilege of paying to rent movies from Apple I would think this is a bad deal. I tried to use my subscription to see one movie, paid $9 or so to see JoJo Rabbit. Well, who wants to look at a movie on an iPhone? So I tried to cast it to my Mac Mini. Won't do that, error message basically says "won't do that." Maybe the OS is too old. Unfortunately none of my computers are running Catalina yet (and the Mini is too old to try), so I couldn't use Apple TV for anything.

Don't bother with pirate web sites that promise to stream sports events and movies, ignoring US copyrght restrictions. Some of them demand that you disable ad blockers, and then blast your browser with pop-up windows that are hard to get rid of, advertising gambling and fantasy football sites. Other pirate sites will tell you your Flash plugin needs to be updated, and if you click on their buttons, install malware. Sites vanish when enforcement actions take them down; often they reappear with slightly different names.

Things I have Not Tried Yet

An AppleTV (I haven't tried one) will do more or less the same as the Mini setup described above. It also lets you subscribe to a lot of streaming services, some requiring additional fees. An AppleTV connects via WiFi to your home router and to other Macs on your network. It will show your pictures stored in iCloud or in the iTunes library of a computer on your network. The AppleTV will store 1000 photos, in case your router can't connect to the Internet.

There were rumors that Apple would sell a TV service package in 2016 that included about 25 channels, including broadcast channels and live sports. This didn't happen. But YouTube TV became available on the Apple TV in Feb 2018, doing exactly that.

There are other streaming video sources besides Netflix and Sling and YouTube TV, if you have a high-speed Internet connection. Roku seems to be oriented toward current popular movies and TV series. Hulu interpolates ads into its movies, even if you pay for a subscription (its ownership just changed and Hulu may change as a result). There is also Apple iTunes video streaming.

There is a port of Xbox Media Center, called Kodi, for the Mac. It seems to be oriented toward playing movies stored on the Mac, but it does have music and picture display abilities. It's free.

VLC is another music and video player for the Mac. It plays many audio and video formats. It's free.

I think there are analogues for all of this on Windows PCs, but I have not investigated. I did hear that "Windows Media Center" is being discontinued by Microsoft.

Future of the Mini

My 2012 Mini is past the end of Apple support. It won't run the latest OS. It doesn't have a T2 chip so much of its streaming is limited to 720P. There are now "4K UHD" TVs but apparently the Mini's graphcs card has problems driving them. The hard drive has been spinning for years now.. sooner or later it will die. Is it time for a new Mini? The old Minis were a bargain, but now the price is up to $800.

I bought an 8GB Raspberry Pi 4 computer kit and a 1TB SSD drive for about $200. It took me a couple of hours to assemble the computer and install Linux. Setting up the Pi to display pictures at random (using xscreensaver) and play songs at random took some experimentation (using omxplayer). This took a few more days.

Exporting my edited pictures from the High Sierra Photos application was difficult. Using the File > Export menu item to export all 10,000 photos in one operation caused Photos to crash. Instead, I had to to export about 700 images at a time, then quit Photos and restart it, until all were exported. While the files were exporting, a tiny little progress pie chart was shown in the top margin of the window and vanished very quickly, but the operation was not done; after a few minutes another progress pie chart appeared that went much more slowly. Each export operation took about 45 minutes for 700 files. When all photos were exported, I used rsync -avzu --blocking-io -e "ssh" screendir PI_SYSTEM:/ssd to copy them to the Pi.

I exported my iTunes playlists to text files and converted them to rsync scripts to move my music to the Pi. Then I wrote a tiny Perl program to play songs at random.

I will miss Photos and Music.. but I won't miss the capricious redesigns and buggy implementations of the last 10 years.